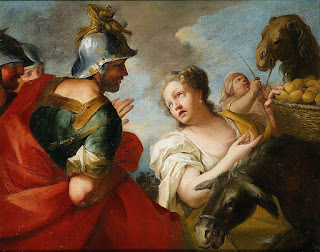 When I became a Christian at the age of 33 yrs. old, I had already been married for seven years to my present husband. Neither of us went to church or were interested in the things of God.

As time went by, I began to grow more and more unsettled. I was a new creature in Christ.  I had new interests and desires.  I was growing in the Lord and was still an immature Christian who had much to learn. I became irritated with my husband when he didn't want to attend church with me. I even began thinking about what it would be like to be married to a Christian. Maybe I needed a new husband.

Living in an unequally-yoked marriage is difficult and lonely. You might not recognize the phrase "unequally-yoked". In marriage it refers to a husband and wife who are both non Christians. I have a  FAQ's  section on my website that addresses the issue.

Thank God He soon convicted me and stopped my flawed thinking before it was too late. He was revealing to me an idea I hadn't thought of. God could do the impossible. He could reach my husband for Christ and change his heart. He alone could draw him into a relationship and regenerate his very soul. I would get a new husband with the same man!

“For the unbelieving husband is sanctified by the wife… For how do you know, O wife, whether you will save your husband?”  (I Corinthians 7: 14, 16)

Here is a little history lesson on Abigail and David:

After King David had commanded several successful military campaigns, he mercifully spared King Saul’s life in a cave in the region of En Gedi. David then journeyed into the wilderness of Paran following Samuel’s death and burial. Samuel had, under God’s direction, chosen and anointed David as the future King of Israel.

By this time David had already taken Saul’s daughter Michal as his wife; a gift from the King to David for a crushing defeat of the Philistines in exchange for his bride’s dowry, as vengeance on the King’s enemies. David and his men were in the wilderness when he heard that a man in Carmel named Nabel, whose sheep were being sheared, might have provisions for him and his young warriors (I Samuel 21-24).

Mission Possible is a book for women who are unequally-yoked in marriage.
Using God's Word, it offers the reader hope and encouragement,
while applying Biblical truths.

The traditional story of “Abigail” in I Samuel 25 is a familiar one. Abigail was married to Nabal, a man of means who treated her and everyone else like dirt. Though Nabal was descended from Caleb, he shared none of his virtues.  When King David heard that her husband Nabal reviled his men, he was ready to kill him and his household. Abigail went out to meet David with humility and gifts. David highly praised Abigail’s courage and advice. Nabal soon died upon hearing what took place after his drunken binge. Abigail became David’s wife when he proposed after learning of Nabal’s fate. Abigail would now reside with the King in a “fairy tale” ending. 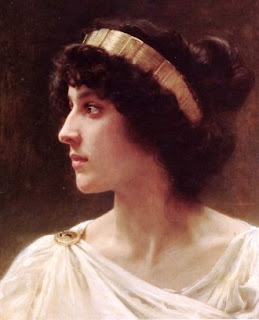 Not so fast… Don’t be “caught up” in the Abigail syndrome. I believe God has a New Testament application for those of us who stand in the gap for our unbelieving husbands. Let’s look at what this passage does not represent:

We don’t pray that our husbands will “drop dead” so we can marry a believer as that would not be in God’s perfect will for us. Neither do we hope he’ll die from a heart attack to “pay him back” for his evil ways. God has a better plan. I believe this would be the God honoring scenario for the wife who believes for her husband’s salvation.

Interestingly, when David sent his men to ask favor and provision from Nabal, he was indifferent and inquired: “Who is David, and who is the son of Jesse?…Shall I then take my bread and my water and my meat … and give it to men when I do not know where they are from?” (I Samuel 25:10-11). Likewise, your husband, just as Nabal, doesn’t know the King yet.

Often times it is difficult to tithe, attend every church service, or be at every Bible study or function because your husband doesn’t see a need for you to participate or share you with God. Be patient. He must see your commitment and desire to be with God’s people and in God’s presence.

Nabal was a self-made man who was very prideful and greedy. Reading Jesus’ parable of the rich fool in Luke 12:16-20, we see similarities.  Nabal was not thankful for anything, nor recognized God’s hand of provision at all. Your husband may be “rich and full of worldly things.” His equating “good things & provision” to GOD are foreign. Only GOD can change his heart and priorities as you pray for his spiritual enlightenment (Ephesians 1:18). Pray for God to woo him by His Spirit into a curiosity and awareness of the things of God. 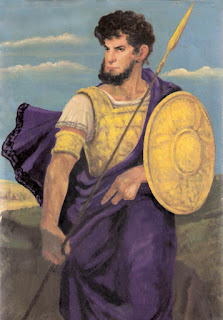 Unlike King David who planned to wipe out Nabal’s lineage, God has compassion and mercy on our spouses. He is “not willing that any should perish, but that all should come to repentance” (II Peter 3:9). God wills that your spouse join you in “holy union.” The apostle Paul states in I Corinthians 7:14, 16 “for the unbelieving husband is sanctified by the wife …for how do you know, O wife, whether you will save your husband?”

When Abigail heard what Nabal had done, she quickly prepared an offering for King David. Our offering brought to our King is a humble heart, a willing & submissive spirit, and unwavering obedience. We intercede on our husband’s behalf by meeting the King of Kings.

King David praised Abigail for her good sense and devotion:  “Blessed be the Lord God of Israel, who sent you this day to meet me! And blessed is your advice and blessed are you , because you have kept me this day from coming to bloodshed… unless you had hastened and come to meet me, surely by morning light no males would have been left to Nabal” (I Samuel 25:32-34). David would have wiped out Nabal’s name but it was God’s desire to “promote a Godly lineage.” Abigail’s actions and attitude spared Nabal but Nabal didn’t recognize her sacrifice. Our sacrifice on our spouse’s behalf is unwavering faith and persistent prayers offered up to the Throne of Grace. GOD always takes notice of devotion!

God cherishes the soul we carry to Him in love when it’s “one flesh” we seek.


You can visit my website  HERE  for information on
ordering a copy of  MISSION POSSIBLE.