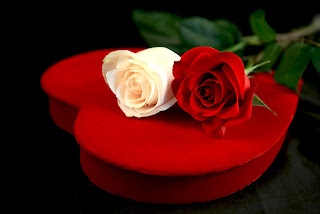 Valentine's Day is just around the corner.


In honor of NATIONAL MARRIAGE Week  (Feb. 7th -14th)  I'm hosting a giveaway featuring a copy of the new movie COURAGEOUS along with a few other goodies!

Here's what you have to do for a chance to win this Valentine's Day Giveaway package:

Simply answer one of the questions at the end of this devotional on 'Courage', and I'll choose a Winner on February 9th and announce it on this Blog.  Don't forget to write your answer in the "Post a Comment" box (below) and check back for the winner.  I'll be mailing out the gift package right away!

The gift package will include the movie COURAGEOUS on DVD, microwave popcorn, a few Valentine goodies, and a copy of my paperback book MISSION POSSIBLE.

"Courage" is showcased in the Bible

There are also several women in the Bible who were courageous. Three of my favorite examples are Sarah, Moses' mother, and Eunice.

In Genesis 12 we find Sarai (Sarah) following Abram to Egypt during a time of famine in Canaan.  He convinced her to tell the Egyptians that she was his sister, and not his wife, for fear of losing his life. It took great courage for her to agree to the plan, one in which God Himself intervened.

Exodus Chapter 2 gives us the story of Moses' mother, who going against orders from the King of Egypt, hid her young son in the bulrushes and trusted God to protect him from harm.  Her courage and obedience led the way for Moses to become the leader of his people, and an instrument of God against Pharaoh.

II Timothy Chapter 1:5 tells us that the Apostle Paul reminded young Timothy of his family heritage, including the fact that his mother Eunice and grandmother Lois were instrumental in his spiritual upbringing.  I conclude that Eunice was courageous in her instruction and example of raising her son as a Jewish believer, while it is widely accepted that Timothy's father was a Greek.

The movie COURAGEOUS is a wonderful story of redemption, renewal and re-commitment to family values and leadership within the home. It's a "feel good" flick for men and women alike. Living in a spiritually mismatched marriage presents its own set of challenges and hurdles to overcome.  This film will minister to both sexes as it helps to define biblical roles within the family unit - especially as it pertains to fathers and husbands.

Our society has diminished a man's role in his family by often portraying them in a negative light in movies, TV, and commercials.  Hollywood stereotypes and role models have left many longing for the "days of old" when it comes to men and their true worth.  The movie COURAGEOUS  brings a sense of hope and encouragement to families that have struggled with life's twists and turns, and gives men a godly example to emulate.

On of my favorite Bible verses regarding courage is this:  "I would have lost heart, unless I had believed that I would see the goodness of the Lord in the land of the living. Wait on the Lord; be of good courage, and He shall strengthen your heart; Wait, I say, on the Lord!"  (Psalm 27:13-14)

We know it takes COURAGE to live in a spiritually uneven marriage.

What would you say has been the most courageous thing you have done in your
marriage with regards to your unsaved spouse?

How does the Lord give you the courage to stay committed to your spouse in your unequally-yoked marriage?


Don't forget to leave your answer in the "Post a Comment" box (below) for a chance to win the Valentine's Day Giveaway package.

Deborah is the author of a Christian non-fiction book titled “Mission Possible”.  It is written for women who love the Lord Jesus, but their spouse doesn’t share their passion.  It will encourage and challenge the reader to embrace God’s promises for their spouse and future together.  Visit